With Skybirds, we jump back to the 1930s, and what many consider to be the birth of aircraft kits. Yes, we are going vintage!

‘Skybirds’ was the name given to a range of aircraft kits produced by A.J.Holladay during 1932-46, with a hiatus from 1942-45 as materials were reserved for the war effort. The range was the brainchild of J.H.Stevens, a young designer and artist who designed them, drew the plans and illustrations, and wrote extensively on the subject of flight and aircraft. He has been credited with inventing, or at least establishing, the 1:72 scale which has been the mainstay of aircraft kits ever since (there will be more on this subject in a later story).

END_OF_DOCUMENT_TOKEN_TO_BE_REPLACED 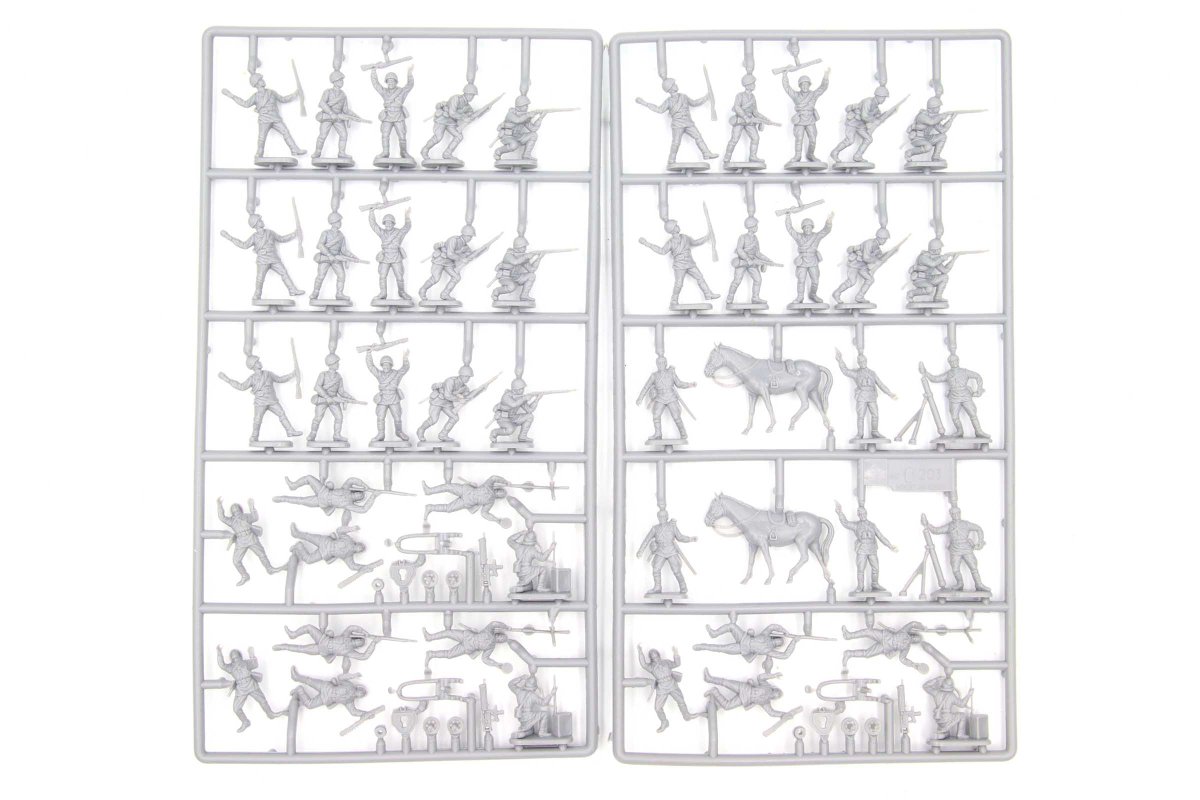 The Importance of Accuracy

Some makers might get away with making plastic soldiers that are only vague approximations of their historical counterparts. After all, they would perform perfectly well as toys. ESCI, however, considered themselves to be producers of military miniatures, and accuracy was of prime importance. Many of their customers wanted the figures to look correct, and would have the knowledge to spot errors. So, how well did they perform in this respect?

END_OF_DOCUMENT_TOKEN_TO_BE_REPLACED

Checking Out the Competition

As we have seen in Fighting Toy Stories, the Airfix Military Series of 1:32 plastic figures were both cheap and good quality. They sold well, and not un-naturally, other manufacturers were attracted to the market. How well did the Airfix figures stack up against the opposition?

END_OF_DOCUMENT_TOKEN_TO_BE_REPLACED

Over the years, military figures have been made in various types of plastic. The two forms most used are polystyrene and polythene. The former can be categorised as ‘hard’ because it is rigid and the latter ‘soft’, because it is flexible. ESCI has used both types, so let’s explore why by taking a look at a typical set that has been modelled in both materials – the Afrika Korps.

END_OF_DOCUMENT_TOKEN_TO_BE_REPLACED

Most of the sets produced by Airfix were of troops fighting on the front line. As such they are usually armed with the most common weapons such as rifles, sub and light machine guns, and grenades. During World War 2, all armies supported these troops with a smaller number of men equipped with heavier weapons; heavier in the literal sense, and usually operated by a small crew, but capable of putting out a higher firepower.

END_OF_DOCUMENT_TOKEN_TO_BE_REPLACED

ESCI was established in Italy in 1930, to trade goods between the mainland and the Italian colonies – hence its name “Ente Scambi Coloniali Internazionali” or, roughly translated, the “International Colonial Trade Exchange”. In the 1960s ESCI began importing Japanese plastic construction kits, and in 1972 began producing its own kits. It was the first firm to produce 1:72 military vehicles (Airfix at that time were working in 1:76) and as part of this range produced small sets of hard plastic infantry.

END_OF_DOCUMENT_TOKEN_TO_BE_REPLACED

Most toy makers have embraced the concept of extending their range by the creation of variations to their basic mouldings. The most common way this is done is simply by finishing the models in different colour schemes. Sometimes, the physical models are varied by the addition or changing of ancillary (and often plastic) parts (see this story for an example of how Solido did this). Both of these approaches keep the costs low and make maximum use of the existing moulds.