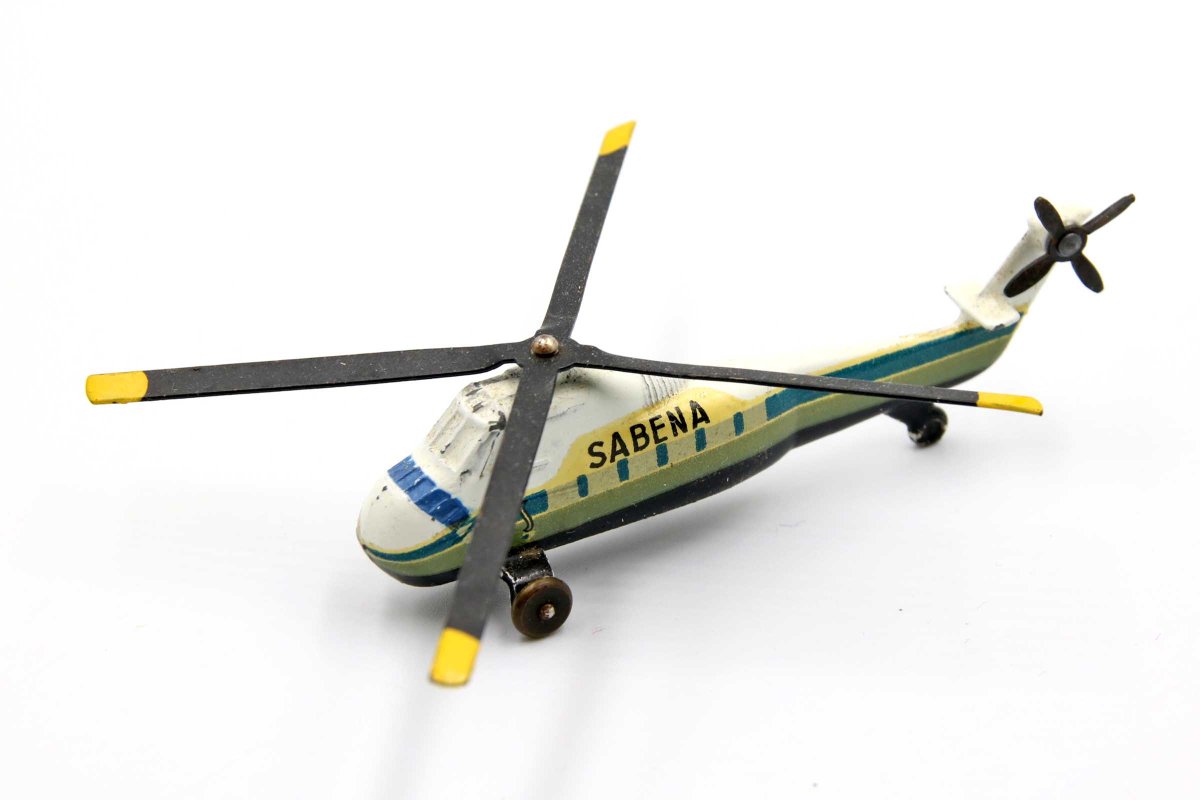 We have seen elsewhere on Fighting Toy Stories how the French output of Dinky military vehicles added an interesting set of models to the British selection. Is the same true for the aircraft?

The French factory at Bobigny in the outskirts of Paris, seems to have been charged with developing a complementary range of models to those created at Binns Road. They were busy and, despite the dislocation caused by the Second World War, created a score of aircraft models to add to the British output. As with their military range, their choice of subjects reflected the French market, mainly comprising contemporary French aircraft with a few US machines used in France. To sample their output, let’s take a look at a different type of aircraft that was new and exciting in early post-war Europe – a helicopter, in the shape of the American Sikorsky S-58.

The model is comprised of a single main casting in Mazak, to which are pinned two rotors (the main rotor and the tail rotor) and underneath an axle with two wheels. The main features of the S-58 are clearly modelled, including the large cockpit windows, the air intakes on the upper surface of the nose, the exhaust behind the rotor, the rear wheel, and the horizontal stabiliser on the tail. The rotors are flat tinplate stampings, and both they and the wheels rotate freely (I can’t resist giving the main rotor a spin and seeing the yellow tips create a very satisfying circle). The overall shape of the model looks right, and it scales in at a slightly larger 1:190 ratio.

The casting is painted white on its upper surfaces, and black for the underside, with large transfers depicting the Sabena livery and the windows along the sides of the cabin.

Underneath the model are the following marks:

Although early helicopters were used in small numbers during the Second World War, it was only after that war that they became a practical proposition and were built in quantity. Sikorsky was one of the major helicopter producers. The S-58 first flew in 1954, and was a hugely successful aircraft, with more than 2,000 eventually being produced. The US armed forces used them as transports and for anti-submarine warfare. The S-58 could fly at speeds up to 122mph, and could carry up to 18 passengers.

In addition to the US, the helicopter was also used by the French armed forces in Algeria and Vietnam for troops transport and casualty evacuation – here we have the first French connection. However, Dinky (probably wisely) chose to portray the helicopter in its civilian guise, as an aircraft operated by Sabena.

Sabena was the national airline of Belgium, until it collapsed in 2001. In the 1950s, Sabena introduced the innovative and rather exciting concept of a helicopter service between major cities in north-western Europe. From their hub in Brussels, flights linked Antwerp, Rotterdam, Eindhoven and Paris (the second French connection), offering ‘direct’ and ‘fun’ flights to heliports located close to the centres of these cities. Between 1956 and 1963, the S-58 provided this service, and it is one of these helicopters that Dinky have modelled.

Now, some of my British readers may think that the S-58 looks strangely familiar. And there is indeed a British connection, because like other Sikorsky helicopters, the S-58 was also produced under license in the UK by Westland. Here, it was given a turbine-powered engine and called the Wessex. 382 were built, and served with the Royal Navy and RAF from 1961 until 2003, becoming best known in its later years as a search and rescue aircraft.

So, here we have a French model that is nicely detailed, and has relevance to both the French and British national markets. Although the Wessex did have a slightly different nose profile to the S-58, a careful repaint would produce a decent representation. I wonder why Dinky in England never released one? As well see in a future story, the liaison between France and England seems on occasion to have been poor! Nevertheless, as with the Dinky military vehicles range, the French aircraft are a well-made and interesting addition to the British offerings.

Dinky produced models of two other helicopters. The first was the large Bristol 173 (Dinky model 715) which existed in real life only as a prototype, but was developed into the Bristol 192 Belvedere troop transport. The second was another Sikorsky aircraft (model 716), the smaller S51. This was also, like the S-58, built under license by Westland as the Dragonfly, and served in the Royal Navy as a search and rescue helicopter.

The helicopters were not the first Sikorsky aircraft modelled by Dinky. Back in the 1930s, when flying boats were all the rage, Dinky created the 60w ‘Pan American Airways Clipper III’, which was a Sikorsky S.42 four-engined flying boat.