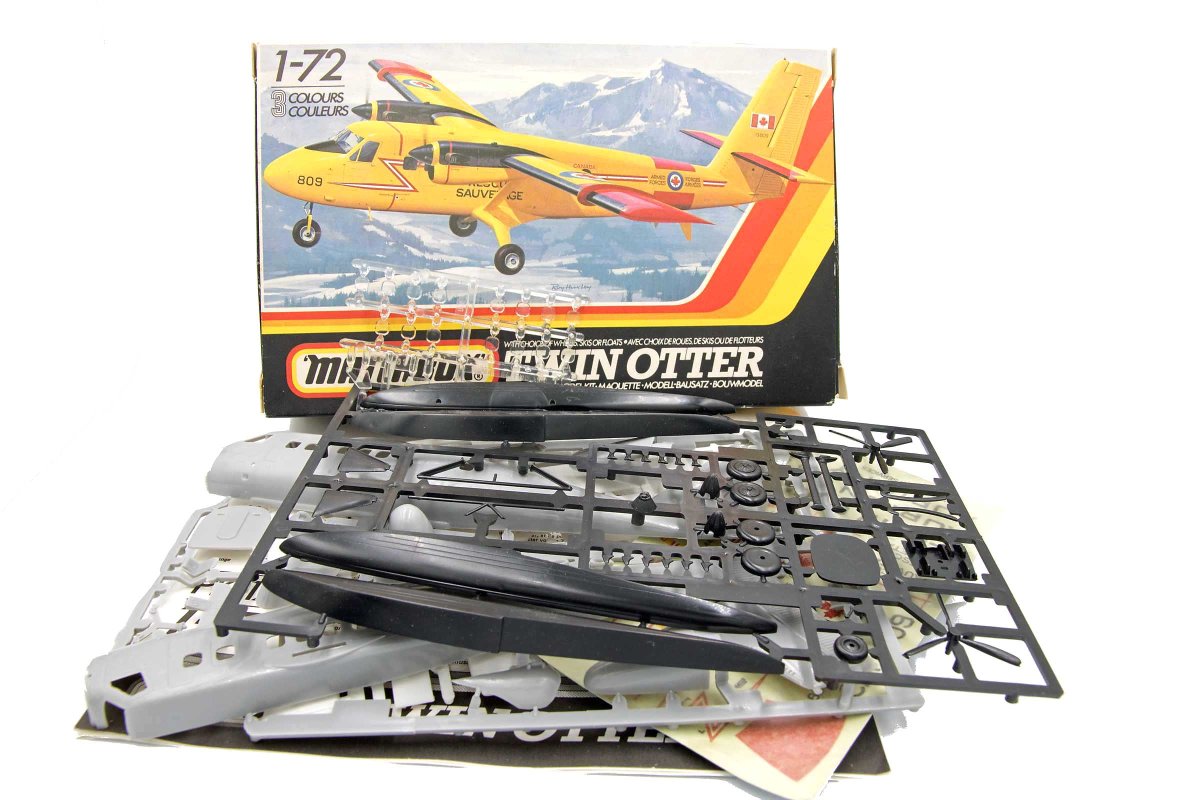 Choices are good. The more choices there are in a plastic construction kit, the more attractive it can seem, because the purchaser has agency over how the finished model turns out and the kit has more potential. Further, it may be worth buying multiple copies of the kit in order to create the different options. So, what sort of choices might a manufacturer offer? To look at this, let’s turn for a change to a largely civilian aircraft, the de Havilland Canada DHC-6 Twin Otter.

Canada is a vast country, with many remote habitations in rugged locations, and sometimes severe winter weather conditions. In this environment, there is a need for small utility aircraft capable of operating over long ranges from short airstrips and/or stretches of water.

The answer to this challenge is a strong, powerful and reliable aircraft with the option to fit wheels or floats and Short Take-Off and Landing (STOL) characteristics – the ability to get airborne or land using only a short run. In the 1960s, the de Havilland company created a new aircraft with these features, the DHC-6 Twin Otter. Why ‘Twin Otter’, I hear you ask? Simple – because the new aircraft was twin-engined and designed to replace de Havilland’s previous offering, the DHC-3 Otter (an animal equally at home on land and water).

The aircraft first flew in 1965, and through to the end of production in 1988, a total of 844 were produced. In fact, the design was so successful, the aircraft was licensed to a new company Viking Air and production was restarted in 2008, since when a further 140 aircraft have been manufactured. The Twin Otter is now to be found throughout the world.

The DHC-6 Twin Otter was powered by two engines giving a speed of 210mph and a range over 800 miles. It could carry up to 20 passengers or equivalent freight, and was used for a variety of roles in addition to its core transport duties – as a search and rescue aircraft, a water bomber (scooping water into the floats and releasing it over fires) and even a parachute training aircraft. Full-span flaps helped to keep the landing speed low, and the twin engines increased the safety margins of an already reliable aircraft.

Inside the box are the typical Matchbox contents. There are four sprues of parts, one of which carries the transparent windows. The other three are, in usual Matchbox fashion, differently coloured. A white sprue holds the wings, a grey sprue the fuselage, and a black sprue the various undercarriages. An instruction leaflet and decal sheet complete the contents.

Decals and painting instructions are provided for two aircraft:

Note that this kit, produced in the later period of the Matchbox range, has a couple of changes from the previous Matchbox formula. There is no stand, as these were phased out c1980, and the Twin Otter was one of the first kits to appear in the new design of box created in 1982.

So, what choices did Matchbox offer for the Twin Otter modeller?

Firstly, we should note that in earlier times Matchbox had promoted the idea that their kits did not need to be fully painted, but that the constructor could content themselves with painting details only if they wished. To this end a ‘mini paint plan’ was provided in the instruction leaflet. This is further examined in my story about the AW Siskin. By the 1980s however, this idea had been discretely buried, and although the instruction leaflet continues to indicate where small parts require specific painting, this is simply an adjunct to the overall colour schemes on the bottom of the box.

Secondly, we have already noted that decals for two aircraft were provided. As is often the fact with popular subjects like the Twin Otter, these options could be extended by using third-party suppliers, who provided further decal options in the appropriate scale.

Thirdly, the kit itself offers three options of undercarriage. The Twin Otter was most often fitted with sturdy non-retractable wheels, and the two decal options are for this version of the aircraft. For situations where the runway was covered with snow or ice, snowshoes or skis could be fitted around the wheels, and for operating from water the wheels would be replaced with a pair of floats. All three of these configurations are possible from the kit.

The parts or these different options take up a lot of space on two of the sprues. The skis are held on the white sprue, while the floats and wheels are contained on the black.

In addition to this, the Twin Otter was available with two nose configurations. A longer nose cone was introduced in later series of the Twin Otter to provide for increased baggage storage, and alternative nose parts are provided. These are moulded on the third, grey, sprue.

Of course, even with the options outlined above, it is worth observing that Matchbox could have done more. No figures (crew or passengers) were included in the kit. Taken together with the lack of display stand, it is thus difficult to portray the aircraft in flight. The cabin doors do not open, the cabin itself is completely bare, and none of the control surfaces are separate parts that can be positioned. Decals and paint schemes might have been provided for further aircraft.

However, most of the above could only be achieved at the expense of more parts and a consequently more complex build, bigger kit and no doubt higher price tag. I think Matchbox were wise to focus on providing the major structural options. The essential feature of this kit is that you can construct it with either wheels, skis or floats – and that choice dramatically increases its attraction.

In the 1990s, the Matchbox moulds were passed to Revell Germany, who marketed the Matchbox range throughout the decade, and then in the 21st Century began releasing the kits under the Revell name. The moulds were unchanged, but the kits were produced in mid-grey plastic and decals were often updated.

If you like rugged Canadian STOL aircraft that can be fitted with a variety of undercarriages, then you will also be interested in the PK-125 Noorduyn Norseman. Matchbox produced two other floatplanes, the naval search and spotting aircraft PK-36 Fairey Seafox and the German PK-401 Heinkel He 115.